Currently, almost all students in Indiana go to public school kindergarten. But, parents have a choice to delay formal education until age 7.

There are people who want to take that right away from parents. If the compulsory school age is lowered, all 5 and 6-year-old children will be forced to begin formal education at age 5, even if their parents think they are not developmentally ready.

In the history of compulsory schooling, there has long been a struggle between parents and the state. Parents have a natural right to control their children’s upbringing, but the state uses the legal doctrine of “parens patriae” to “do what is necessary to protect the child’s welfare, even if such actions diminish parental control.”

We take compulsory schooling for granted, but it was not always this way. Thomas Jefferson said,

“It is better to tolerate the rare instance of a parent refusing to let his child be educated, than to shock the common feelings and ideas by the forcible asportation and education of the infant against the will of the father.”

This sounds like such a radical statement to modern ears, doesn’t it? But now we have had compulsory schooling for so long that we assume it must be kept. It’s a slippery slope to keep pushing the kids into formal school younger and younger, stripping away parental rights to raise and educate our own children.

The time to fight against a proposed educational change is now, before the change has been declared law. Before the change has become part of our society as “the way it is.” When states have done things such as banning private schools, banning the teaching of foreign languages in public schools, forced Amish people to attend school after 8th grade (contrary to their religious beliefs), and made it compulsory to salute a flag, then parents have had to go to court to fight for their rights.

When government seeks to expand its reach, an attentive population should question whether the government has the authority to do so. Thus, the important question here becomes: What is the state authority for expanding the compulsory school age?

“[N]o legislator should promote the expansion of state-compelled school attendance ages unless…such an expansion of compulsory school age by the state is consistent with the state’s constitution and the spirit and history of freedom of choice in his or her state.”[i]

Those advocating for lowering the compulsory school age must show that there is state authority to do so.

Compelling every 5 and 6-year-old to begin school, even if it results in what a parent considers to be harm to the child

Almost all children in Indiana begin school at age 5, and almost all of them do so in public school. The children who are not beginning school at age 5 have parents who chose not to have them begin. If the state takes away the parental right to delay school, the state is saying that it knows better than those parents do about their own 5-year-old child.

“Just a couple of years ago, “House Education Committee Chairman Robert Behning (R-Indianapolis) said the issue was not a big deal due to state data showing a high rate of kindergarten attendance.”

What would cause the state, or really anyone, to suddenly say that a government bureaucracy is in the best position to decide, over the protest of parents, what is in the educational interest of an individual 5-year-old child?

One stated reason uses the existence of the My Way Pre-K program. Now that we have public school Pre-K offered through the state, the state doesn’t want parents using Pre-K and then taking time off before starting Kindergarten.

“McCormick says lowering the compulsory school age from 7 to 6 would benefit the same at-risk children the state wants to help with its limited My Way Pre-K program. ‘So those are the very kids that we’re trying to target for pre-K that we would like to see that continuation through kindergarten,’ she says.”

First, no evidence is offered to support that it is at-risk children who are not attending kindergarten at age 5. Is it better, on average, to begin formal school at an older or younger age? There are studies that support both sides of the debate, but the consensus is that there is a small benefit to entering school at an older age.

Secondly, there is no evidence offered to support that starting school at age 5 will help any children, let alone at-risk children. Public-school Pre-K is offered to low-income families. The choice to delay entrance to kindergarten (called “redshirting)” for a child is overwhelmingly a choice made by affluent households, because they are the ones who can afford an extra year of childcare, or can afford to have one parent stay home from the workforce to raise children.

“Redshirting is nearly twice as prevalent in schools serving affluent student bodies as it is among those whose mean household income was close to the poverty line. This finding is not too surprising, given that the choice to redshirt may mean sending your child to preschool or daycare one additional year before kindergarten, which could be financially prohibitive among some low-income families.”

The evidence shows that lowering the compulsory school age would overwhelmingly affect affluent families, the exact opposite of those who are targeted by Indiana’s My Way Pre-K program.

Who is in the best position to determine what kind of help a 5-year-old child needs? A blanket statute that affects every 5 and 6-year-old child in the state of Indiana, without regard to individual variation and development, or the parent of that child?

Forcing Educational Conformity, Regardless of Outcome

Lowering the compulsory school age in Indiana is unpopular among Hoosiers. The IndyStar reports, “Lawmakers have previously sought to lower the age at which parents are required to start educating their kids, but to no avail. Now, though, those lawmakers have an important voice on their side. ‘Indiana just doesn’t like that conversation,’ said State Superintendent Jennifer McCormick. ‘But there are some legislators that do.’”

“Probably no deeper division of our people could proceed from any provocation than from finding it necessary to choose whose program public educational officials shall compel youth to unite in embracing… Those who begin coercive elimination of dissent soon find themselves exterminating dissenters. Compulsory unification of opinion achieves only the unanimity of the graveyard.” West Virginia State Board of Education v. Barnette (1943).

Those pushing Hoosiers to lower the compulsory school age say they are doing it to “help.” I hearken back to Ronald Reagan’s old quote, “The nine most terrifying words in the English language are: I’m from the government and I’m here to help.” 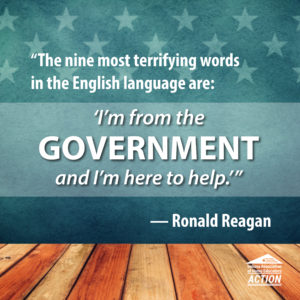 It should be concerning to all Hoosiers that our Superintendent is pushing an educational agenda that Hoosiers have rejected time and again.

Lisa serves as a member of the IAHE Action Government Affairs team. She kept her career as a part-time attorney and works for herself as a sole practitioner, with a practice area in immigration law. She is known particularly for her representation of victims of domestic abuse. She continues teaching adults as a speaker on immigration law at continuing legal education events for fellow lawyers. Lisa resides in Noblesville, Indiana (Hamilton County). with her husband, three children, two dogs, and a cat.

One thought on “The heart of the conflict – The Natural Right of the Parent to Control their Children’s Upbringing vs. State Power”