Many thanks to the Coalition of Central Indiana Tea Parties for offering the Indiana homeschool essay contest!

A Constitution Day celebration sponsored by the Coalition of Central Indiana Tea Parties was held in Danville, IN on September 17th. Winners of an Indiana homeschoolers’ essay contest read their essays entitled, “Explain why our Federal Government has no Constitutional authority to be involved in education.” Prizes of $500 and $250 were awarded to first and second in two age divisions. John Crane gave an insightful revisiting of our Constitution, and former Thunderbird F-16 pilot, Matt Modleski, gave an exciting video presentation of the “American Dream.” Around 100 people enjoyed quite an inspirational afternoon! 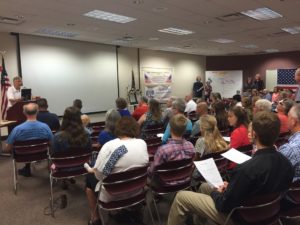 Congratulations to those who placed in the Coalition of Central Indiana Tea Parties Essay Contest. The top entries will read their essays at the Constitution Day event below. 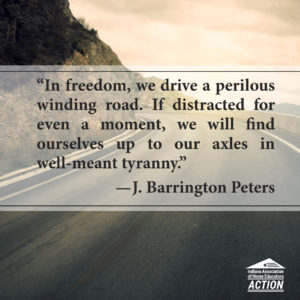 Second floor, accessed from northwest entrance off of Washington

Program: John Crane of the Sagamore Leadership Initiative will introduce us to this day of celebration of our Constitution.

Presentation of awards to winners of the Coalition sponsored Indiana homeschooler’s essay contest entitled, “Explain why the Federal Government has no Constitutional authority to be involved in education.”

The top entries will read their essays.

Featured speaker, Matt Modieski, was a Thunderbird F-16 jet pilot who will talk about the “American dream.”

Life-size replicas of four of our Founding Fathers will be on display with a large “timeline” of our founding history. Have your picture taken with a Founder!

Come meet some of the thinkers and makers of our past and future. Everyone is invited, especially our youth, so bring your friends to an exciting mid-day event.

Explain why the Federal Government does not have the Constitutional authority to be involved in education.

Copies of the winning essays will be presented to the Indiana Governor and State Legislature to read.

Essay composition suggestions: (these are not written in stone, but varying greatly from them might reduce your chances of success)

Include footnotes for sources and quotes. (not included in word count)

Judging will be completed by September 1, 2016.

Only winners and honorable mentions will be notified. A list of the winners will be available after September 15, 2016 at www.libertyliveshere.org.

Your essay will not be returned to you, so make a personal copy before you send it to us.

Honorable mentions might also be shared (without exposure of your personal information) as examples of our youths Constitutional knowledge.

We invite you to accept the challenge and examine our Constitution and the intent of our Founders with regard to education.

Be sure to give us your age and contact information.

During the recent IAHE Action Government Affairs panel at the 2016 IAHE Convention, State Representative Tom Washburne (R-HD 64 Evansville) mentioned there is a difference between freedom and liberty.  We asked him if he would share his thoughts with home educators.

“Give me freedom, or give me death!” — right?  Wrong.  We all know that when Patrick Henry of Virginia made his famous speech before the War for Independence with England, what he really said was, “Give me liberty, or give me death!”  Now some may say: “So what?  Who cares?”  Well, we all need to care, for these are two very different statements with very different implications.

Let’s first consider the concept of freedom — the ability to do whatever it is that we want to do.  Note the word “whatever” in my definition, because herein is the problem with freedom: it has no associated value system.  There is no real right or wrong.  If an action feels good to you, your “freedom” allows you to do it.  Kris Kristofferson (through Janice Joplin) nailed this meaning of freedom in his hit song Me and Bobby McGee:  “Freedom’s just another word for nothin’ left to lose,

And nothin’ ain’t worth nothin’ but it’s free…”

You see, if there is no value, no right and wrong associated with freedom, then what we end up with is a collection of valueless actions, and conflict will be inevitable.  In such conflicts, who is to say who wins?  Ultimately, the government wins, through lawyers, judges, and litigation — the power of the sword.  But the government will have its own world view, which may or may not agree with yours or have at its base any concept of enduring values. I think that this is why we have seen such frustration with the explosion in the number of lawsuits in the last few decades.  People are losing the ability to resolve conflict on their own and are turning to a more and more valueless Court system for answers.

In contrast to freedom is the concept of liberty.  Liberty is like freedom in that it maintains that humans have choices.  But liberty also has with it an element of values, right and wrong.  Yes, people enjoy a sort of freedom in liberty, but it is a self-constrained freedom.  A society based on liberty voluntarily limits available actions to commonly accepted views of morality, or as John Locke put it, operates within the bounds of natural law. Accordingly, when values conflict in a society based on the concept of liberty, it is not solely the government that dictates the outcome, but instead the broader, deeper principles that the people hold dear.

Like John Locke, America’s founders loved liberty.  Indeed, they based our society on it.  They spoke of liberty often in terms of self-government.  For them, what we today call the government is only half of what they referred to as government.  They saw another form of government at work in America: the duty and ability of Americans to govern themselves.  In the words of John Adams: “We have no government armed with power capable of contending with human passions unbridled by morality and religion. Avarice, ambition, revenge, or gallantry, would break the strongest cords of our Constitution as a whale goes through a net. Our Constitution was made only for a moral and religious people. It is wholly inadequate to the government of any other.”

If you have read this far, you may be saying to yourself, “Wait a minute, if liberty depends on values, then there must be different forms of liberty depending on the values in play,” and you are correct. In addition, it must be pointed out that some societies will not support liberty at all.  Value systems which support liberty are said to be systems which maintain the conditions of freedom.

In the United States, we have simply taken it for granted that when given freedom, society will flourish.  We accordingly fail to realize that freedom is only possible where the values of the society support the conditions necessary for freedom to work as intended.  In other words, giving freedom is not enough. Without a value structure that also gives rise to liberty, a society will fail.

At the founding of the United States, Christianity was the dominate culture of the people, and  Christianity provided the foundation for liberty. In such liberty, America has flourished without heavy government intervention.  Remember, “Where the Spirit of the Lord is, there is liberty” (2 Cor. 3:17).  Note the contrast of this with the recent experience in Iraq where a well-intentioned imposition of freedom through war has resulted not in a prospering society but rather in chaos.  The reason? These countries have inherent cultures that give little support to liberty or even freedom.

I should add that one virtue at the time of America’s founding was that minority voices should be tolerated.  Put another way, in the Christian view of liberty true free speech, free association and free exercise of religion are to be respected. But with this toleration of dissension, there was and is the risk that some other culture can use these rights to emerge from obscurity.  And should that culture get strong enough, it could even gain control of government and curtail the very values that gave it life.  God help us should such a culture prove hostile to Christianity.

Every generation of Americans must be mindful and recognize that our original Constitution was built on Christian liberty. Should we drift from this concept of liberty to a concept of freedom, there is a danger that the exercise of these freedoms will actually undermine the system of government that recognized them.  In other words, we must teach our children that there is right and wrong, there are values, and that these values are critical to ourselves, our families, our churches, and, yes, our government.  Indeed, America as we know it depends upon true liberty.