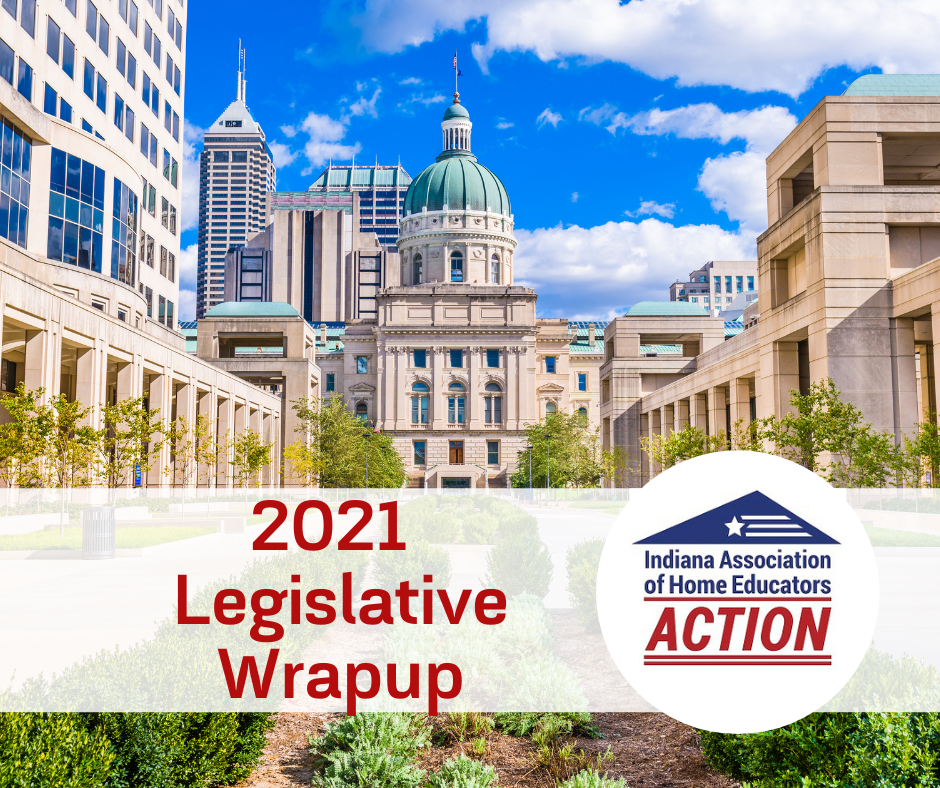 Every year, IAHE Action and our sister organization IAHE, monitor threats to homeschool freedom. There is no better way to describe the challenges of the past year than the opening of Pandora’s Box. While the entire world looked at home education with wide-eyed awe and innocence, the long-term impact on our community and our freedom is yet to be determined. Everyone claimed the label of “homeschooler” in spite of clear legal definitions to the contrary.

Pandora’s box is an artifact in Greek mythology connected with the myth of Pandora in Hesiod’s Works and Days. It can be best summarized as “a present which seems valuable but which in reality is a curse”.

The IAHE Action team sorted through 420 Senate and 1605 House bills to identify issues that required monitoring. Eighty-five bills were flagged for further review and approximately 40 bills were followed closely throughout the session. Every amendment to these 40 bills was examined, and every hearing and committee meeting was monitored. The team was on-call and ready to respond should anything arise of concern. Many late nights were spent monitoring committee meetings, shifting meeting calendars, and reading proposed amendments. Our team also spent many hours on Zoom and at the Statehouse with legislators, in the effort of protecting homeschool freedoms.

In November 2020, our team met with Dr. Jenner from the Governor’s office to discuss numerous concerns that we have repeatedly addressed with the Department of Education in recent years. Shortly following our meeting, Dr. Jenner became Indiana’s first Secretary of Education. Our team has continued to work closely with her and her team over the past couple of months.

While monitoring Indiana State Board of Education meetings, IAHE found that the audit results regarding excessive dropouts being classified as homeschoolers conducted in the summer of 2020 were adjusted during the January 2021 SBOE board meeting. IAHE contacted the SBOE legal counsel for an explanation, resulting in IAHE being invited to have a seat at the table as the issue is yet again addressed this summer as the SBOE tries to hold schools accountable for continually misclassifying dropouts as homeschoolers in order to retain ADM funds.

Rep. Tim Wesco introduced a bill to make nonpublic nonaccredited diplomas legal. IAHE responded immediately to Rep. Wesco stating that nonpublic nonaccredited diplomas are ALREADY legal according to Indiana Code. For years, the IAHE has helped families address issues of diploma discrimination by potential employers, and while we wish these situations didn’t exist at all, a diploma equivalency bill is only beneficial if it doesn’t open the door to potential regulations at the same time. After multiple revisions of language with IAHE, language backed by HSLDA, Rep. Wesco pulled the bill for this session and invited us to work with him this summer on new language.

SB 259, introduced by Sen. David Niezgodski, specifies it is the policy of the state to recognize the parenting rights of a parent regardless of whether the parent has a disability. IAHE concerns themselves with all parental rights bills. Parental rights are the foundation of home education. This bill passed and while home education was not directly mentioned, this bill shores up the rights of parents with disabilities.

IAHE monitors various bills that continue to pop up every year, such as cursive writing, the start of school year, and compulsory school age. While all of these bills failed again, the IAHE team monitored them all the way to the end to ensure that the bills do not affect homeschoolers. One bill that did not die this year was a bill requiring public schools and accredited private schools to teach civics education. IAHE made sure the bill did not affect home educators and we applaud the legislature for passing this. Home educators have long agreed with the statement Winston Churchill made (paraphrasing George Santayana) when he said “Those who fail to learn from history are condemned to repeat it.”

In January, our team began monitoring HB 1531 due to severely problematic language that would codify the Department of Children’s Services (DCS) regulatory policy with regards to exigent circumstances. The original language of the bill would have required home educators to allow DCS agents into our homes because our homes are our schools. Despite voicing our strong concern, the bill passed out of the House in mid-March.

Once the bill moved to the Senate, IAHE Action began working with the bill’s sponsor, Senator Erin Houchin. Senator Houchin acknowledged the problematic nature of the terms used in the bill and agreed to improve it. The intent of the bill was to provide parents, who send their children to brick and mortar schools, more rights than they are currently afforded. Current DCS policy allows workers to show up at schools and request to interview a child without a warrant and school personnel generally allow the interview to occur without objection. As such, the goal is to limit the ability of DCS to demand access to children through the school system.

In March, IAHE Action issued a call to action to encourage members of the Senate Committee on Family and Children Services to exempt home educators’ homes from the legislation. The quick response of our members meant legislators were open to amending H.B. 1531 and the next day, the Senate committee passed IAHE Action’s proposed exemption without debate. The legislation now states nonpublic nonaccredited schools with less than one (1) employee (a.k.a. homeschools) are exempt from this provision. IAHE Action is grateful to Senator Houchin for recognizing the inequity of the language and working to protect homeschool family homes.

IAHE Action, IAHE, and partners such as HSLDA, Parental Rights.org, and the Indiana Family Institute offered amendments to further improve this legislation. H.B. 1531 passed through the chambers, excluding home educators.

Families should be aware that any participation in school programs and/or services does leave the child open to the DCS questioning in “exigent” circumstances if the child is engaged in school functions. This could include sports, choir, classes, and therapeutic services such as speech therapy. Parents should always be aware of all laws pertaining to children when they are in a school’s care.

By the end of the session, the topic of expanded funding for education and education scholarship accounts (ESAs) began grabbing headlines across the state. Multiple bills were presented and pushed in the name of homeschooling and school choice, in spite of IAHE’s expressed concern for the impact on the current freedoms we enjoy. Taking advantage of the large numbers of new-to-homeschooling parents who were unprepared to make the sacrifices home education requires, many legislators seized a long-awaited opportunity and pushed for funding to follow the student, creating a long-term shift in the face of a short-term crisis.

While the passage of Educational Savings Accounts in the Budget Bill is currently restricted to certain children who are not enrolled in public or accredited private schools and who have special needs and whose parents fall in a specific income bracket, we know that this is merely the camel’s nose under the tent, and the body will follow the nose.

Indiana has a long history of failure and fraudulent activity with funding new virtual programs, and ESA programs have been used across the country to lure home educators back into the system. One legislator even stated that ESA users would no longer be homeschoolers but rather would be public schoolers in a different form.

No one truly knows what the ESA program will look like and what regulations will be required. However, just as private schools that accept vouchers were promised no additional regulations, we have seen more regulations piled onto them every year since conception.

Public funding should come with accountability, and educational dollars are no exception. While the details of this expansion will not be finalized for months, or even years, to come, it’s clear that regulations are tied to any acceptance of public funding. Implementation of all bills is left to regulators and bureaucrats that will have full discretion. Indiana’s treasurer will have the complete authority to create and implement at will any rules deemed necessary to operate the program.  Services and vendors will require approval. Children may be required to take state assessments, be subject to school oversight, and may lose certain civil rights in the process. No one is sure what the ESA program will look like, and IAHE strongly cautions families who look into the ESA funds, even to the extent of consulting an attorney for advice.

Homeschool families deserve educational funding or program access because they’ve saved the state money by not enrolling their children in public schools.

Whether they have children or not, all taxpayers contribute funding that is then allocated in the budget by legislators. Public services such as parks, libraries, schools, and fire departments exist for the good of the entire community, and not every person will utilize every service. Making the decision to homeschool does not leave surplus funds in the budget, any more than purchasing books at Amazon means you are entitled to a refund from the local public library.

The IAHE and IAHE Action are blessed by the dedication and selfless efforts of our staff and volunteers that work around the clock to monitor threats to our freedom. Your IAHE Membership and donations to IAHE Action support their work and the ministries of the IAHE all year long.