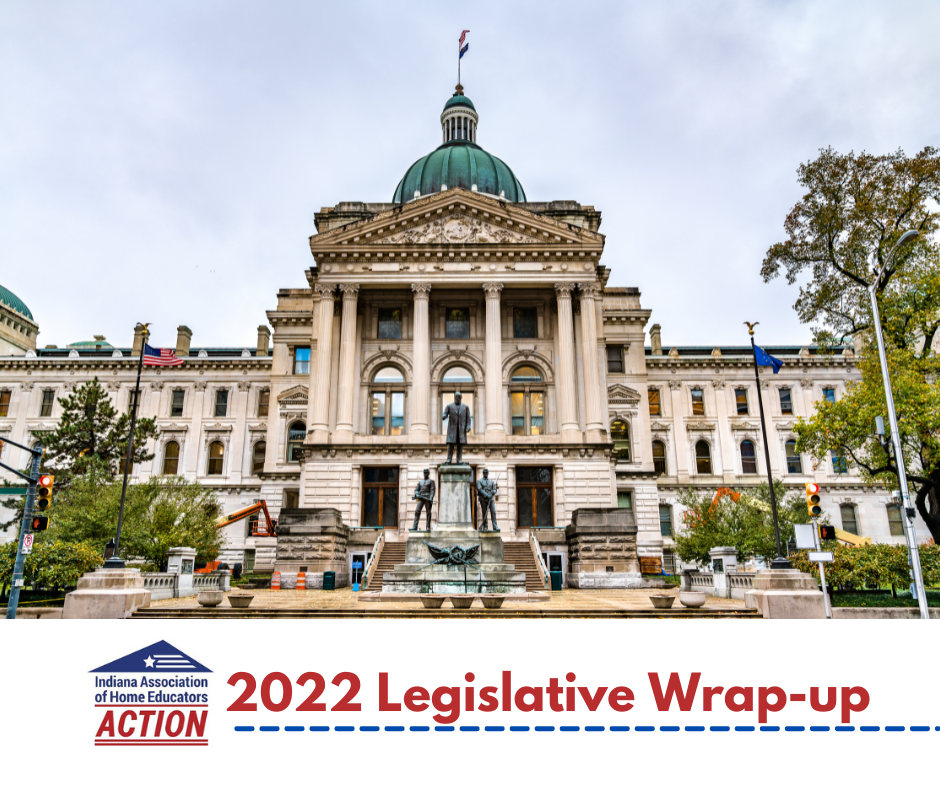 The 2022 Indiana General Assembly session has concluded. Daily, the IAHE Action team diligently monitored bills potentially affecting your homeschool freedoms. Here is a look at what occurred during this legislative session!

The session began with the team on alert for issues that could create unintended consequences for homeschool families. We monitor trends seen in other states such as micropods, government funds for homeschoolers, enrollment incentives, HOPE scholarships, collection of homeschool data, the federal Open Schools Act, social emotional learning and critical race theory requirements for some, and the increase in the number of homeschoolers in the past year.

What the team saw in Indiana this year was reminiscent of the wild west as multiple organizations and education stakeholders fought for new territory in the wake of two years of the pandemic and failing public schools.

This session 849 bills were introduced and our team flagged 43 for monitoring. We are grateful for the many legislators and legislative assistants that worked with us this year to protect homeschool freedom.

The following bills are some of the dozens that our team actively followed throughout the session.

Approved during the 2021 legislative session, the new ESA program will launch in the fall of 2022. Multiple bills were presented this year in an effort to clarify details of the program’s implementation. Children with special needs, including homeschoolers, will be eligible and enrolled students will then be reclassified as a distinct type of public school student. IAHE and IAHE Action have been actively monitoring the program along with its implementation across the country. Many of our questions from last year remain unanswered. Where is the exact classification of these students in Indiana code and what regulations will apply? What accountability will be put into place and who will issue the student’s diploma? Our goal is to make sure that homeschool freedom is never impacted by the fast-paced expansion of school choice initiatives.

IAHE reached out to Indiana Educational Savings Account program Executive Director, Jaclyn Guglielmo, to share many of the questions that we have had and that we continue to see within the homeschool community. We are grateful that Ms. Guglielmo shares many of our questions and clarified that INESA enrolled students will no longer be considered homeschoolers. INESA students will be required to have a service plan, will be assigned a student test number, and will be required to take statewide assessments. IAHE offered language to ensure the autonomy of home educators as this program develops. We do expect to see attempts to see ESA expansion in the next session.

In 2020, Indiana saw its first of many incentive-based, virtual, public school programs targeting Indiana homeschoolers with the promise of government money. While enrolled students are no longer homeschoolers, confusion and misrepresentation of the law continues to surround the program due to the marketing tactics of those involved. HB 1093 was important legislation in Indiana’s defense of public tax dollars. HB 1093 included several things, but we were most concerned with Section 5 pertaining to IC 20-19-2-15. In addition to the current incentive language, Representative Behning added that “a participating entity, an employee of a school or participating entity, or a member or representative of an association affiliated with a school employee organization” could not offer a student or prospective student anything that had monetary value in exchange for “enrolling, re-enrolling, or incentivizing continued attendance of the student.”

While HB 1093 was a bill focused on controlling fraud within the sphere of public education, we know that this fraud is often being perpetrated in the name of “homeschoolers that want public funding.” As always, the IAHE and IAHE Action stand against the use of home education in any fraudulent manner. In February of 2022, members of this particular incentive-based program started rumors that IAHE had a hand in the crafting of HB 1093’s language in spite of us not having a role. While we did monitor the bill closely, IAHE was not involved in lobbying for or against this legislation.

Transgender participation in sports was a hot topic this session. Originally, IAHE was concerned for some homeschool sports teams and contacted the representative who introduced the legislation. In the end, the bill language was loosened up and passed without concerns for homeschool sports teams. Gov. Holcomb vetoed the bill on Mar 21, 2022.

Homeschools do not meet any of these definitions.

This bill would have removed certain public libraries from the list of entities eligible for a specified defense to criminal prosecutions alleging the dissemination of materials or performances harmful to minors. The language was pulled from SB 17 when it died and inserted into HB 1134 which also died. This topic has been ongoing for the past two years. Expect to see it again.

This bill originally included all nonpublic and public schools to require seniors to complete FAFSA. However, in the end the wording was changed so that nonpublic schools (which include homeschoolers) “may” pass along FAFSA info to seniors.

We can always count on bills to lower the compulsory school age and add cursive writing as a required curriculum to be introduced. Bills on these topics were seen in 2022, and both of those bills died once again. Should either of these topics move in the future, IAHE will be opposed and will put out a call-to-action to alert home educators.

IAHE would like to congratulate Senator Dennis Kruse on his retirement from the Indiana Senate. Senator Kruse has been a friend to homeschoolers during his legislative career. Thank you for your service, Senator Kruse!

The 2022 session revealed the variety of views that legislators have regarding public education. The next Indiana General Assembly will discuss the budget, and therein will discuss education funds following the child. IAHE will be here to monitor proposed legislation to ensure homeschool freedoms are not compromised in any way.

Wanting to make a difference next session?

Build your individual relationships with your local senator and representative now so that you can get their attention next session to express your views on legislation as IAHE alerts of any potential threats to homeschool freedoms. (Be advised that over 70,000 emails from constituents to legislators were lost or marked as spam this session. IAHE encourages you to meet your legislators in person as they return home to your area, contact them by phone, send cards, etc in addition to sending emails.)