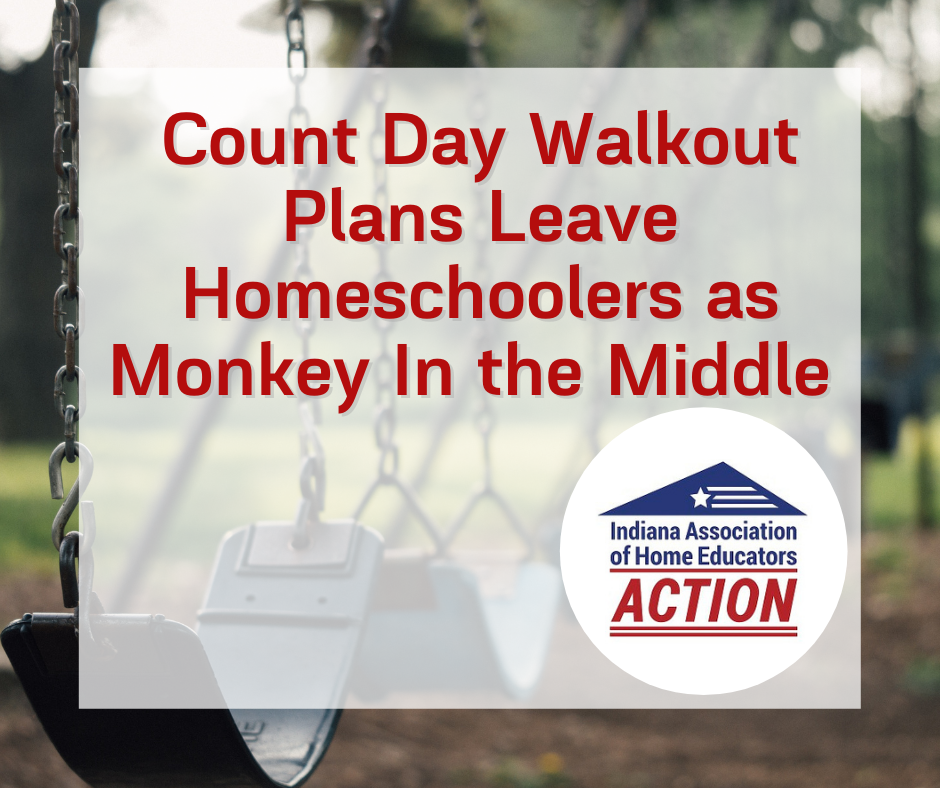 You may recall the common playground game of Monkey In the Middle. When among good-natured friends, it is an amusing pastime at recess. However, even among friends, it becomes tedious and frustrating when one individual is constantly tasked as the “monkey.” This is the current situation of homeschooling in Indiana.

Two years ago, before the pandemic, Chalkbeat published an article about public and public charter schools mislabeling dropouts as homeschoolers. Presumably, the motivation for such actions was to protect the interests of the schools by inflating graduation rates and suppressing dropout numbers. Incredulously, the schools and Chalkbeat pointed the finger at the lack of homeschool regulation, despite the fact that the schools were the only ones who knew the students involved.

For the duration of the last two legislative sessions, legislators have been working to discourage the “push-out” problem within the schools. Simple logic makes it clear where the abuse of the system lay, and it was not with homeschool families. Kudos to the General Assembly for recognizing it.

Today, there is an entirely new segment of the population who wish to use our homeschool freedom for political advantage while never intending to homeschool.

The pandemic has revealed serious problems within the education system to parents. Quite rightly, those parents are angry and wish to effect change for their children. Unfortunately, sclerotic administrations and recalcitrant elected officials are shutting down the rising voices of parents and taxpayers.

School board tone-deafness is leading some parents to contemplate other ways to get administrators’ attentions. Across the state, a recurring theme crops up. Frustrated parents are discussing the idea of withdrawing their children from public school to “homeschool” them for one week in September in an effort to impact their school’s enrollment count for the fall semester. If a child is not enrolled in the public school on September 17, 2021, the school cannot claim the students for the purposes of funding. These same parents would “homeschool” their child(ren) for a week or two and then re-enroll the child(ren) into the same school system.

This is a problematic plan on a number of fronts.

IAHE Action encourages any family who earnestly seeks to pursue homeschooling to do so. Our sister organization, IAHE, has been supporting families as they begin their homeschool journey since 1983. Volunteers are standing by to assist you.

For those looking to provoke change in the public school system through decreased funding, take a moment to contemplate the lasting impact and what that might mean for families who genuinely decide to homeschool because their children need a different environment.

If playing fast and loose with the education of children is not incentive enough, consider what will happen to the students reentering a public school system that has suddenly lost millions of dollars to fund teachers and programs. The schools will be forced to make cuts to extracurriculars, Fine Arts, P.E., librarians, etc. and these will all come at the expense of the students. This impact will hit especially hard on the students with special education needs.

Stripped of funding, publicly-funded schools will be forced to make changes, but there is no reason to think it will be the changes desired. In an attempt to quell such behavior in the future, increased regulation may be hoisted upon the homeschoolers. The pressure to require heavier regulation and jump through more hoops with government oversight will intensify dramatically thereby depriving families in legitimate need of homeschooling the liberty to do so with the current system.

Change can happen, but it will not happen overnight.

The Framers of our Constitution gave us the ability to hold our government accountable. This leveling agent is called Election Day. Frustrated parents should aim their efforts toward meaningful change by finding candidates who share their concerns, work for those candidates, or even consider running for School Board yourself.