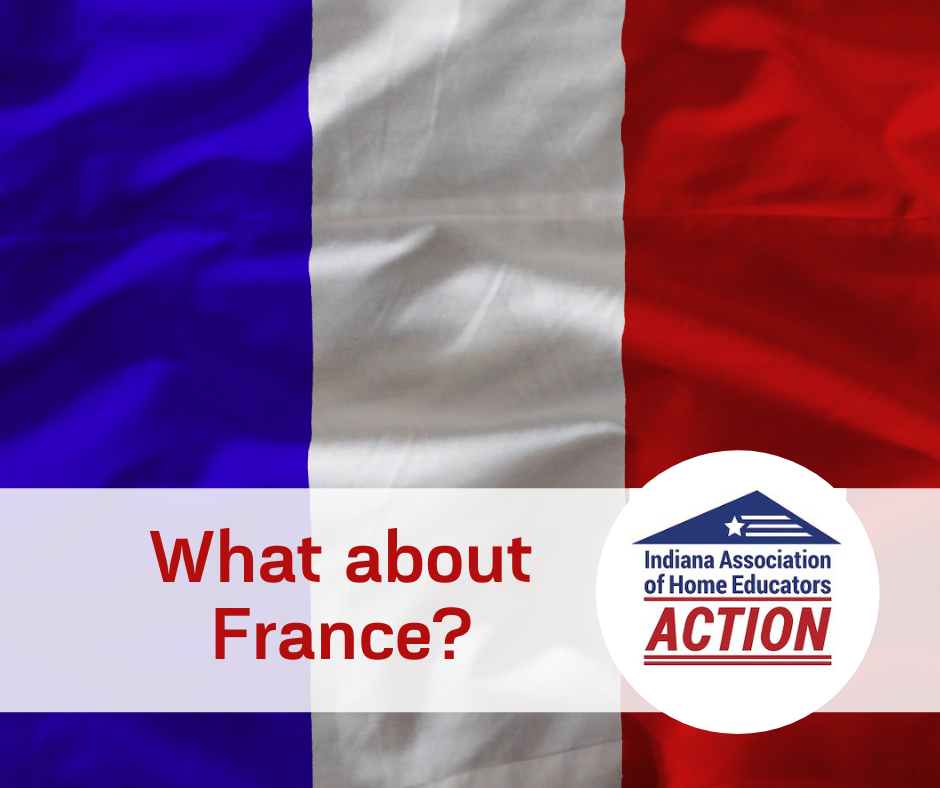 In an attempt to enforce secular values, on July 21, 2021, France instituted severe restrictions on home education.

“Homeschooling (IEF) will only be authorized for reasons of health, disability, artistic or sports practice, family homelessness, remoteness. of an establishment, and also in the event of a “situation specific to the child motivating the educational project”. A transition period is planned until the 2024-2025 school year.”

The specifics of “authorized reasons” have yet to be determined.

Parents who do apply to homeschool must submit documentation to their local town hall and the academic director of the national education services are subject to investigation by local Social Services. Those that are declined or found to be homeschooling without approval are subject to jail time of up to 6 months.

Unlike the American Constitution, the current French Constitution was crafted to be a secular document. Since the time our country adopted the United States Constitution, France has had fifteen different Constitutions with the most recent iteration being adopted in 1958. This 1958 Constitution states, “France is an indivisible, secular, democratic and social Republic, guaranteeing that all citizens regardless of their origin, race or religion are treated as equals before the law and respecting all religious beliefs.” Many individuals may prefer the secular language found within the French governing documents; however, if the government is secular, all people derive their rights from the government. In fact, there are legal theorists who argue the law confers parenthood upon people, not God. A government big enough to give parental rights is big enough to take them away.

In contrast, the American Constitution is built around the framework that God grants individual rights the government cannot, under any circumstances, deprive of a person. Since the writing of the Magna Carta in 1215, children have legally been considered given unto parents, not the State or government. In the Christian worldview, children belong to God and as such cannot be considered “property” in a legal sense. God has appointed parents with the duty to raise, protect, and educate children in trust to Him. It was upon this philosophy that American parental rights have rested for the majority of our Nation’s history. So long as parenthood is understood to be granted from an entity that predates the civil contract of the People, parental rights are secure.

Unfortunately, courts have been eroding this security for decades. Among the first limitations on parents’ rights was compulsory education. Prior to the introduction of this concept, education was strictly left to the parents to determine. However, once public schools, which were not free to families, began, there have always been advocates for requiring all children to be educated under the government umbrella. In fact, the famous Pierce v. Society of Sisters dashed progressive dreams of all American pupils in government school desks when it ruled parents had a right to place children in private schools.

This decision rested on the legal philosophy of a parent’s natural right given by God to direct their children. Once natural rights are abandoned, so too are our rights to raise and educate our children as we see fit. Regrettably, recent legal theory is not necessarily parent-friendly as is evidenced by the misguided article, “Homeschooling: Parent Rights Absolutism vs. Child Rights to Education and Protection” by Morris Wasserstein Public Interest Professor of Law and Faculty Director of the Child Advocacy Program, Elizabeth Bartholet.

By declaring its government as secular, France has divorced parental rights from natural law. As the new arbiter of rights, the French government can quite easily remove a parent’s right to direct a child’s education as is evidenced by this recent decree.

While these steps by the French government seem foreign to us, it is an excellent reminder that homeschooling freedom is not guaranteed. French homeschoolers are appalled to watch their freedoms vanish. In Indiana, IAHE Action, along with our sister organization IAHE, is on the front lines of protecting your parental rights and homeschool freedom. You can help keep Indiana families free from potential regulation and government overreach when you donate to support our work.