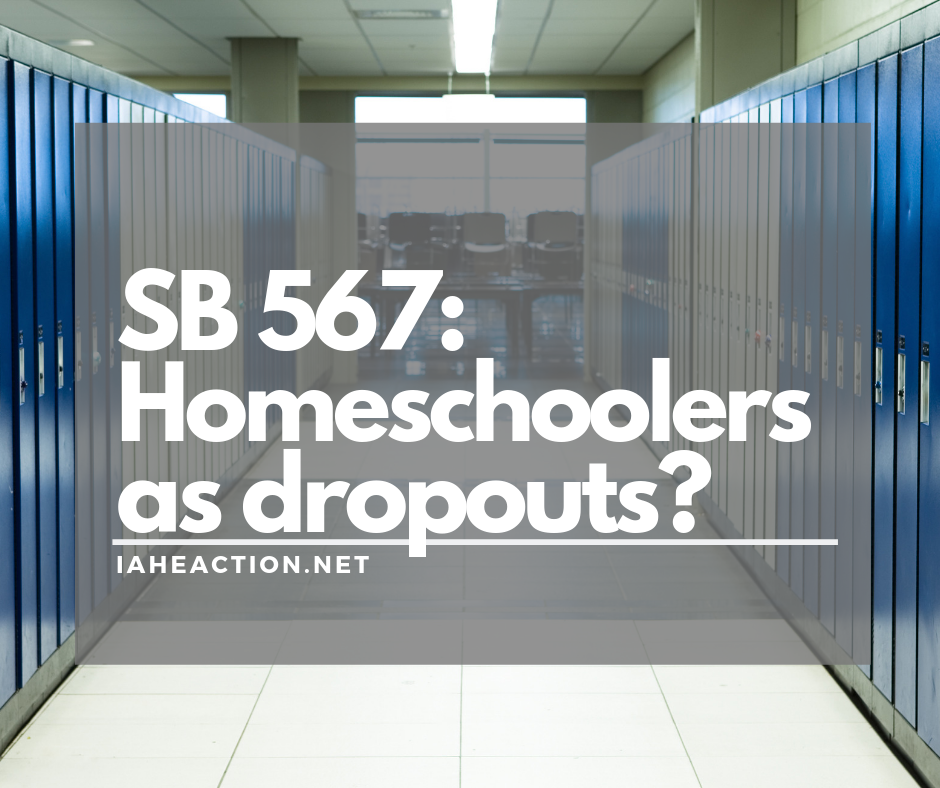 Students who leave any public school — virtual or traditional — to be homeschooled would count as dropouts under the school’s graduation rate. Behning said he thinks schools abuse this option and those students, who might be more difficult to educate, end up in virtual schools.

Does Rep. Behning believe that families providing a home education are dropouts? Absolutely not.

The issue is whether or not schools are misreporting the number of students withdrawn to homeschool in an effort to protect their graduation rates and funding. Labeling chronic truants and dropouts as homeschooled students is a shell game with potential implications for all involved.

IAHE Action and our sister organization IAHE have been fighting this issue for years.

In 2013, a law was put in place in an attempt to address the problem of high school dropouts being categorized by the public school as homeschoolers. When a family asks to withdraw their student from a public high school, the school is required to provide families with counseling and information about Indiana law on home education (non-accredited, private schools).

Section 10 of House Enrolled Act 1005, added I.C. 20-33-2-28.6, a new section, to law. I.C. 20-33-2-28.6 provides the following: (a) This section applies to a high school student who is transferring to a nonaccredited nonpublic school. (b) Before a student withdraws from a public school, the principal of the student’s school shall provide to the student and to the student’s parent information on a form developed by the department and approved by the state board that explains the legal requirements of attending a nonaccredited nonpublic school located in Indiana. The principal and a parent of the student shall both sign the form to acknowledge that the parent understands the content of the form. (c) If the parent of the student refuses to sign the form provided by the principal under subsection (b), the student is considered a dropout and the principal shall report the student to the bureau of motor vehicles for action under section 28.5(g) of this chapter. The student is considered a dropout for purposes of calculating a high school’s graduation rate under IC 20-26-13-10.

In 2017, IAHE Action worked with Rep Behning to stop schools from mislabeling students that were withdrawn from the public school system to homeschool as dropouts.

In an attempt to curtail this practice, HEA 1384 contains language that prohibits a school from classifying a student as a homeschooler unless the school has substantial evidence that the parent or guardian of the student initiated the student leaving the public high school or an accredited nonpublic high school. The Indiana Department of Education may require the school to produce this evidence if it is ever requested. It will be important for the school to have evidence in writing that the parent initiated a transfer to homeschooling.

Faced with the staggering failure of Indiana virtual schools, the legislature is once again trying to hold public schools accountable. And, one of the key metrics for evaluating a public school and granting funding is a school’s graduation rate.

One of the things that the original language in SB 567 attempted to do was to increase school accountability by removing the distinction between dropouts and students withdrawn to homeschool.

SB 567 is a bill regarding increased oversight and regulation for virtual schools (generally a good thing). Among other provisions, Amendment #14 removes the “homeschool exemption” from the list of allowable reasons for a student to be removed from a graduation cohort. This means that, if passed/enacted, any student who withdraws from your high school for reason of “homeschooling” will count as a drop out in your high school’s graduation rate. This amendment will negatively affect the accountability grade of many public high schools.

As this bill moved from the Senate through the House, IAHE Action spoke with Rep. Behning to share our concerns about the implications of grouping new homeschool students in with dropouts. Behning authored and passed a House amendment that reinstated the homeschool exemption on April 9th.

Are schools mislabeling their withdrawn students in an effort to retain their school’s letter grade and funding? Are schools coaching families to complete the homeschool withdraw form… even if the family has no intention to continue their child’s education? Are families being pushed into homeschooling without any understanding of home education?

That answer is unclear.

In 2018, twelve public schools reported that more than 10% of their high school seniors left to homeschool. Over seventy schools reported withdrawal rates of seniors higher than 5%. The IAHE has contact with a large number of families that make the decision to homeschool in order to complete their student’s high school education, but these numbers do not reflect what we see across the state.

Today, Chalkbeat contacted the IAHE to ask if our organization receives calls from families that were pushed into homeschooling by their public school.

Our team continues to field calls from parents sharing their stories about school officials “signing their child up for homeschooling” on the Indiana Department of Education’s website — even when the parent has no clear understanding of home education.

As with any parenting challenge, no one begins homeschooling knowing everything they need. It takes time, research, sacrifice, and hard work to be successful. Most importantly, it takes commitment. We believe that parents are capable of providing a quality home education if they are dedicated to the challenge. But, parents should NEVER be forced into an educational choice by someone else.

The current process of evaluating public schools is broken. The rampant mismanagement of the virtual public school programs has only put a spotlight on an issue that has been present for many years. The debate over SB 567 and the schools’ “homeschool exemption” has only made it clear that abuse of the system is still happening.

In spite of the flaws and abuses in the current process, it is balanced by the need to maintain a distinction between high school dropouts and families deciding to homeschool. IAHE Action and IAHE are in support of SB 567 as it retains the current homeschool exemption for schools without increasing oversight for families.

5 thoughts on “SB 567: Homeschoolers as dropouts?”